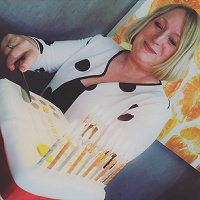 Jarvis Johnson is 18 Years old!  Much has changed since Jarvis Johnson was incorporated on 1st April 1999. On this auspicious birthday Leanne Sowerby of Virtual Marketing Room  talked to Lisa Johnson, Managing Director about some of the milestones over a glass of fizz and a slice of birthday cake!

What made you decide to set the Business up?

My partner Peter Johnson and I had met at Geest (now Bakkavor) at Barton-on Humber where he was Technical Manager and I was QA Manager. Our careers progressed in different directions; Peter became Technical Director at Richmond Ice Cream then decided to pursue a career as a self-employed Interim Technical Manager. Meanwhile, I had joined Co-operative Retail Services as Technical Manager then had made the move to recruitment in a head-hunting role. One evening, over a glass of wine, we compared notes and realised there was a gap in the market for a specialist Recruitment Agency for Interim Managers in the Food Industry. We decided to combine forces and use Peter’s knowledge of Interim Management and my experience in Recruitment ..and Jarvis Johnson was born.

Jarvis Johnson now focuses on placing Technical and NPD people into the Food Manufacturing Industry, we cover both permanent and interim roles. Technical Management was my background and our database is strongest in those areas so it made sense to play to our strengths.

How did you decide what to call the company?

Peter’s full name was Peter Jarvis Johnson – his father and eldest son shared the middle name Jarvis. Before marrying Peter my surname was Stodart and “Stodart Johnson” sounded a bit of a mouthful, plus no-one could ever spell it! My son now has the middle name Jarvis as well. Another name change is imminent for me as I got engaged this Christmas but the Jarvis Johnson name is here to stay!

What were the biggest challenges you’ve had to overcome?

Hmm there’s been lots but three that stand out for me :

When we set the database up it consisted of 13 CV’s from friends and ex-colleagues who had set themselves up as Interim Managers.  When we were briefed with our first assignment it was for an Interim Planning Manager – we didn’t have any of those. We had pretty big phone bills that month!

When we lost Peter in a car accident in 2004, four months after our wedding, it was a pretty huge watershed. Thankfully I took the decision to throw myself at the business rather than throw in the towel.

According to official figures, for 2 of those 18 years the UK was in recession – it was heart-breaking in the tough times having to let good recruitment consultants go – thankfully now we are in an expansion phase again rather than contracting!

How has the landscape changed over the last 18 years?

There are a LOT more Interim Managers operating in The Food Industry now – and more agencies providing Interim Management Services. I think the barrier to entry for new agencies starting up is a lot lower. LinkedIn wasn’t around until 2003 and the set up cost of recruitment software was comparatively high back then – if someone had mentioned a  “cloud-based solution” we’d have thought they were talking about the weather!  The popularity of LinkedIn has meant a lot of Food Manufacturers have put together In-house resourcing teams to tap into the market.

The recruitment industry has always been viewed as a pool where sharks like to swim but over the past few years I have seen more and more “recruiter-bashing” going on – every time I log into LinkedIn recently someone has a bad story to tell of a recruiter and people are quick to comment with their own experiences. A recruitment agency’s reputation is only as good as its weakest employee and I think I’ve been blessed with some fantastic Recruiters, Researchers and Administrators over the years. I’m not saying we’re always perfect but we constantly strive to find ways of keeping our 12,500 candidates happy.

After 18 years aren’t you ready for a change?

When my twins were born in 2012 I had a few months break from the business but I missed it too much. I have never tired of the adrenaline rush I get when one of us calls to offer a candidate their “dream job” or tells a client that their “perfect candidate” has just accepted a position with them. Life is pretty hectic right now juggling 4 year old twins and a thriving business (apologies to anyone who has been in the middle of an evening interview feedback call accompanied by the theme tune to “Paw Patrol”) but I wouldn’t have it any other way!

Here’s to the next 18 years!  Watch this space for an 18th Birthday Promotion….